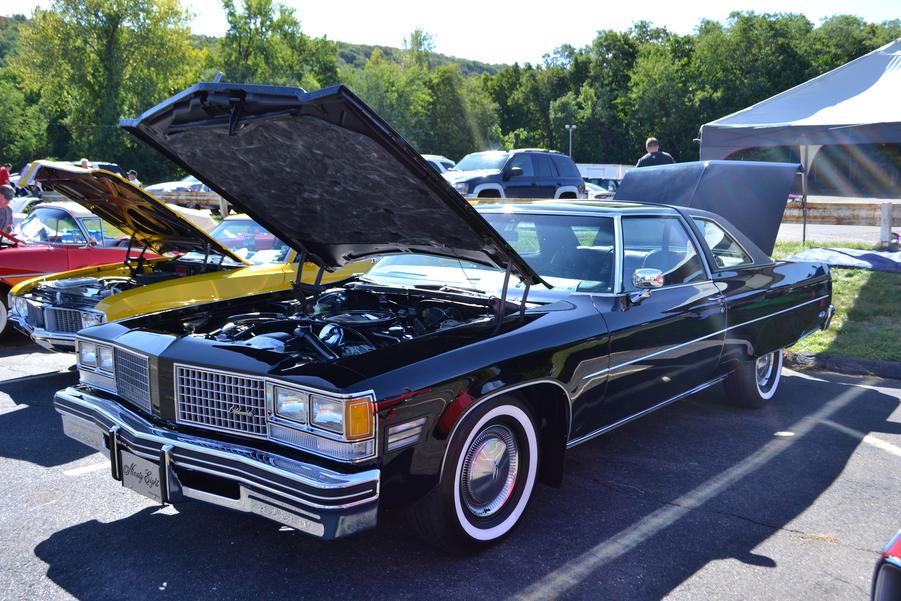 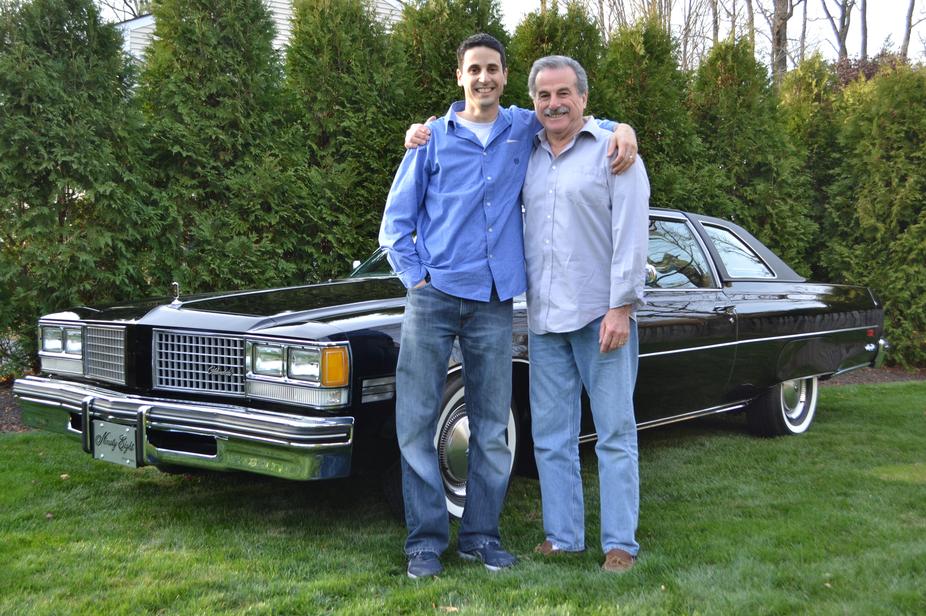 Here's where it all started. 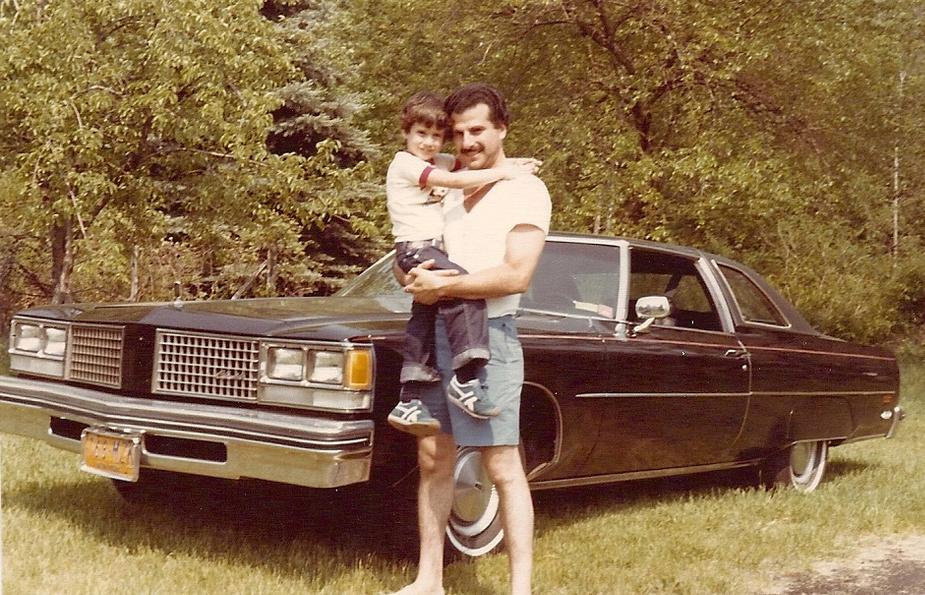 My dad brought The Olds home in the spring of 1979 and she immediately became a part of the family. She's a triple black '76 Ninety Eight Regency Coupe with the rare and beautiful (one-year only) black leather interior. My dad was always extremely proud of her and she always received compliments even when it was common to see cars like her on the road. The Olds was our family car and she literally took us all over, all the time. I can vividly remember being driven to and from school, sports practices and games, friends' houses, weekend trips and summer vacations in the back seat with my older brother Jimmy. Even our dog and cat made quite a few trips with us and there was always plenty of comfortable room to spare!

Over the years, The Olds helped us make countless memories along the many miles traveled.  She escorted just about every friend and family member in comfort and style. Even after reconnecting with some old friends after over 20 years, they all ask about The Olds. They are always happy to hear she's still around and looking better than ever. As the years and the odometer kept on rolling, wear and tear naturally came along. As with any car that's provided the kind of service that she had, she was showing her age and there was a serious question as to the car's future. As time went on, The Olds became more of a backup vehicle and saw much less day-to-day use. I was not about to let her go out to pasture and so I made it very clear to my dad that I would continue to take care of her and make her my car when I was old enough to drive. This took quite a bit of begging and pleading as she was not serving much use anymore and she was taking up a lot of real estate in the driveway.

My love for The Olds started at a very young age. As a kid that was always fascinated with all things cars, The Olds was the epitamy of cars! I always felt very special to be riding around in such a big, classy car. I was always eager to help my dad wash, wax and take care of her. I was the unofficial white wall cleaning and leather Armor-All kid. For a short while, my brother drove The Olds as his first car and she even served as a pickup truck when he started his now very successful landscaping business. I can remember a time when our Snapper lawnmower would hang out of the trunk. It was a bittersweet time for The Olds as she was still running strong and serving a purpose but she just looked sad and this was not my favorite time in the car's long history. Throughout this phase, I waited patiently and when I was finally old enough to drive (legally that is), I started to have an even bigger appreciation for her because now The Olds was MINE!

Fast forward a few years to the mid-90's. I had driven The Olds through my senior year in high school and the start of my commuting to and from college and work. One day, while driving home from college, my friend Vinnie and I spotted another '76 Regency Coupe on the road. This was the first time I had even seen another one since I was a kid. Within moments, both the other driver and I had pulled off the road to talk. It was the start of my first Oldsmobile-based friendship with my new friend Brian. Brian's Ninety Eight is a triple blue beauty and he is the second original owner since 1977. Brian is a truly impressive individual and if there's one thing I've learned from him, it's never to slow down, no matter what life throws at you! Shortly after meeting Brian, we went to an Oldsmobile Club show in Merrick, Long Island. This was the first I had even heard of an Oldsmobile club or show so I was extremely excited to go! I polished The Olds as much as her tired paint would shine, cleaned the white-walls, Armor-All'ed the leather (my childhood training really paid off at this time) and we proudly hit the show scene. While walking around the show, my friend Vinnie taps me on the shoulder and says "John, TURN AROUND, YOU GOTTA SEE THIS!" I turned to see yet another '76 Ninety Eight Regency Coupe pulling into the show...and this one was black, like mine! It didn't take long for me to find my way over to this car and start asking the owner a million questions and taking easily the same number of pictures. My newest Oldsmobile-friend, Steve had his car since his teen years and he had done a frame-off restoration and literally gone through the car one not and bolt at a time. Everything on the car had been gone over in extreme detail and the car just blew my mind because it was better than new. I could not get over the fact that I now knew 2 other guys with '76 Ninety Eight Regency Coupes and seeing this one restored to this level just blew me away! This car immediately became the benchmark for the mission I was now planning on taking The Olds on.

The process of doing a frame-off restoration is nothing to take lightly, especially when it comes to such a massive car. Add to that the fact that these cars are not exactly catalog-built restorations and you have quite an undertaking on your hands. Aside from of tracking down parts, I had to find a body shop that understood what I was going for and was willing to spend the time doing the job right. I was not about to settle as this is such a critical step in a restoration. I got a lead from another Oldsmobile friend on a nearby shop that had just done a beautiful job on his '67 442. The shop owner came to my garage to look over the car and was actually eager to get to work on it. He could envision what the end result would be and he wanted to have a hand in making it happen. I knew I had the right guy for the job as other shops showed little or no interest. As for tracking down parts, I scoured the web, traveled to yards around the country and picked up a number of few parts cars to round up enough quality, original and NOS parts to do The Olds justice.

The restoration was a very, very long process but one that I never lost the drive for. I always knew how rewarding it would be to see The Olds back in her former glory. All of the friends and family that new the car in her prime would always ask how the restoration was coming. Some even doubted it would ever be complete. This only fueled my drive to make the end result even more special. In 2011, I was finally able to drive The Olds to her very first show since starting the restoration. She looked great but was still not quite done. I just couldn't pass up the opportunity of driving her and putting her on display at the New England Oldsmobile Club's annual show for the first time. The engine compartment and trunk were both incomplete and I had a number of loose ends to tie up but I was still extremely proud to have her out there among her family of classic Oldsmobiles. I had honestly only expected to show the car and not have her judged since I still had work to do. My then pregnant wife was less than happy with me about this. She knew how hard I had worked and she was not about to let my pride get in the way of having the car judged. She's amazing and so supportive and she was also a major motivator when I would occasionally stall in making progress on the car. I think she got tired of going to shows with me and hearing me say "I wish I had The Olds here!" Little did I know that she had filled out and submitted my judging sheet ! Low and behold, The Olds came in 2nd place! The judge of my class said something to me that I'll never forget. "John, if you finish what's left to the same level as the work you've already done, this car will have little competition." After getting such recognition from a show judge, I knew I was on the right path and that The Olds would stand out as I had always envisioned, as soon as I wrapped things up of course. Over the next 2 years, I dedicated countless hours to finishing the previously incomplete areas and making The Olds a true show-car. In 2013, she climbed the ranks to 1st place in the same class in which she made her debut back in 2011.

In 2015, The Olds stood proudly in the New England Oldsmobile Club's Senior Class. I knew the competition in this class was going to be intense and I honestly didn't think I even stood a chance. Much to my surprise, she had again taken home 1st place!  Hearing the announcer's call just blew me away. I could not have been more proud of her and now I finally felt like she was getting the recognition I had sought after for so long.

Along the ride, I have made countless friends through a common passion for classic cars, Oldsmobiles in particular. I've been contacted by people all over the world for both parts and information about these amazing cars. I'm always eager to help whenever possible and I love contributing to the preservation of other cars like mine however I can. From a kid that loved all things cars into a car-guy, it's literally been a life-long love affair with cars and with The Olds being closest at heart. It's a great feeling seeing my kids get excited about riding in "Daddy's special, special black Oldsmobile". I can only hope that this is a sign that the next generation will appreciate these cars and continue their legacy well into the future.

I can't thank my friends and family enough for all of the love and support over the years. My amazing and supporting wife Trina, my best friend Vinn for all of the hands-on help and automotive expertise, my close friend and mentor Steve (as well as his Ninety Eight) for all of his tutelage and guidance (and a few parts), and of course Mom and Dad for not only being the best parents but but for selling The Olds to me, and for only $1!